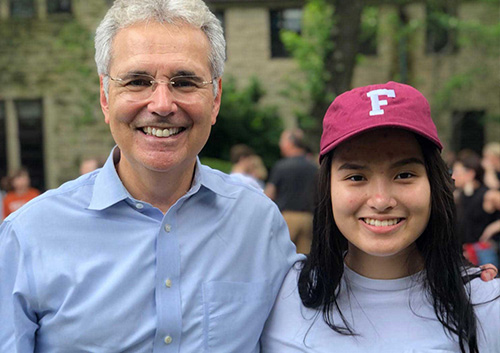 Ron DePinho, M.D., an internationally renowned physician-scientist and cancer researcher, has come to believe that the most effective way to fight cancer is to focus not just on groundbreaking research and therapies to cure the disease but on harnessing the power of what we already know to prevent it.

“There’s enough knowledge of what causes cancer right now that, if simply applied, could reduce it up to 50%,” says DePinho, co-founder and chairman of Unite to Prevent Cancer (UTPC), a group of health innovators and social entrepreneurs who aim to bridge the gap between knowing and doing to make cancer prevention a reality.

“By bringing together an uncommon table of stakeholders—legislators, technology or pharmaceutical companies, academic organizations, care delivery systems, etcetera — and taking a targeted approach,” he says, “we can reduce the incidence of cancer relating to specific instigators.”

Engaging a New Generation in the Fight Against Cancer
DePinho, who was born and raised in the Bronx, previously served as a scientific director at Dana-Farber Cancer Center; as a professor at Albert Einstein College of Medicine and at Harvard; and as president of the University of Texas MD Anderson Cancer Center in Houston, where he is currently a distinguished professor in the cancer biology department. It was there that he spearheaded the launch of the Moon Shots Program, an effort to accelerate the conversion of scientific research into lifesaving cancer treatments.

UTPC’s efforts are a little different, he says. Beyond the preventative focus, the organization’s work is largely aimed at young people—like the effort to raise the age of tobacco purchase to 21, or the push to vaccinate children for HPV. Many of the best ways to prevent cancer in adulthood involve taking action in childhood and adolescence, says DePinho. Which is why UTPC is working to engage young people, their families, and communities.

“Just as what happened with traffic safety or recycling, we want to engage and mobilize that part of society to help drive cultural transformation,” DePinho explains. This kind of work, he says, can save trillions of dollars and millions of lives.

That’s why he was so excited to find that his daughter Alexis had written a paper on the importance of vaccinations for her high school U.S. Government and Politics class. DePinho saw the impact his daughter’s voice could have with her peers, and encouraged her to submit the paper to a Houston magazine, which published the article with an introduction from DePinho. “As a nation,” he wrote, “we must address vaccination and protect our youth—it is a childcare responsibility. But don’t take it from me—take it from an 18-year-old whose future is at stake.”

DePinho says he’s always been “careful not to influence Alexis one way or another” when it comes to academic pursuits, including her choice of college. But when she finally chose to attend Fordham in the fall, he was “over the moon” about it.

Deep Fordham Roots
The family’s connection to Fordham began years earlier, with DePinho’s father, Alvaro, a Portuguese immigrant who stowed away on a ship bound for the United States. Alexis knows the story by heart.

“My dad and all his siblings tell it all the time,” she says. “When he first arrived in the Bronx and was looking for work, my grandfather lived in an abandoned building across the street from Fordham. And he used to tell himself that he would be able to send his kids there one day.”

Alvaro went on to own a real estate and construction company, and he sent his children to Fordham: DePinho graduated from Fordham College at Rose Hill in 1977, his sister Helen from Fordham College at Rose Hill in 1976, and his sister Ester from the Graduate School of Education on the Lincoln Center campus in 1974. All three lived at home and commuted to campus each day.

“My father was extremely generous and altruistic; he supported many in need,” DePinho says. “The core values I was taught at home in terms of respect and service to others were a framework that my Fordham education built upon. It gave me an opportunity to see a path forward, where I can live a life that’s full of service and societal impact.”

Alexis says she didn’t necessarily expect to follow in her father’s college footsteps. She first became intrigued by Fordham in 2017, when she met other alumni at a Houston Presidential Reception her father hosted with the Office of Alumni Relations. But it wasn’t until she attended a summer program at the Lincoln Center campus in 2018 that she could see herself as a Fordham student.

With interests ranging from journalism and political science to math and physics, she’s especially attracted to the University’s broad foundation in the liberal arts and sciences. “I can’t reduce all my interests to one category yet,” she says. And though she knows she’s extending a family tradition, she says she’s also glad she’ll be living and studying at the Lincoln Center campus so she can create her own Fordham path: “I know I’ll have my own experience.”

DePinho is looking forward to helping her move into McKeon Hall on August 25 and begin her Fordham studies. “I think it will be an interesting journey for her,” he says.

What are you most passionate about?
Reducing pain and suffering from cancer. Getting my medical training, establishing a laboratory, and earning accolades for the scientific impact of my research was on one level very gratifying. But what felt quite empty was the fact that all of that knowledge did very little for my dad, who was suffering and ultimately died from colon cancer in 1998. That was a turning point for me, where I started to ask about everything: “Can this knowledge be applied through medicine, diagnostics, or policy?”

What’s the best piece of advice you’ve ever received?
My father told me, and also showed me, that you should serve others before you serve yourself. And that has really dominated my entire life and all my pursuits.

What’s your favorite place in New York City? In the world?
In New York City, it’s Fordham’s Rose Hill campus, of course. I’ve always loved the feeling I get when I get there. It gives me a sense of renewed energy and inner peace.

In the world, I would say Jerusalem and Rome, because of their historic and cultural importance—for different reasons—in modern history. I am a student of history, and I often reflect on major turning points, and I think those two cities have really shaped the modern world like no other.

Name a book that has had a lasting influence on you.
The Bible. I think it speaks the truth of what it is to be a good person. In fact, as a scientist, when you look at the magnitude of the universe and the many forces that exist for which we have no explanation at this point, that awe just makes you feel like there is a higher power that operates to create and maintain this incredible universe.

Who is the Fordham grad or professor you admire most?
I would say that there has been a village that supported my development and has inspired me in many, many different ways. More recently, Father McShane’s leadership of the Fordham community inspires me.

Father Daniel Sullivan really catalyzed and inspired my pursuit of biology. Ruth Witkus, who was chair of the department at the time, gave me career advice and helped me understand that medicine and science were intimately linked and important.

And I would say Dr. James Forbes, who taught a course known as Chordate Morphogenesis, which instilled fear into all pre-med students. He subscribed to the notion that pressure makes diamonds. I learned so much that helped me throughout medical school and my medical training; he really formed the foundation for my understanding of anatomy and physiology. But what was really impressive about him was that he never made you feel like you knew what you needed to know. I remember once I was able to answer one of his questions in class almost verbatim from the textbook, because I was a very compulsive student and had memorized it. And he said, “That’s very good, DePinho, but what page was that on?”

He was pretty intense, but he did it in a respectful way. With him you not only had to be on your best game, you had to exceed it.